October 03, 2017
When Apple unveiled the new MacBook Pro last year it was clear that the MagSafe connector had reached the end of the race. The 12-inch MacBooks had already thought of a dismal epilogue of technology and the lack on Apple's Pro systems was the blow of grace. Its absence, in favor of the USB Port Type-C for charging, was not welcomed with positivity by Apple enthusiasts, deprived of one of the features that distinguished the "their" products. 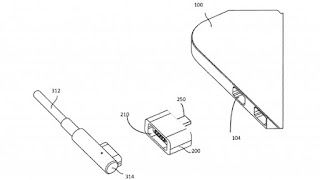 The MagSafe connector uses a magnetic type connection with the port. When the cable is pulled, the connector is disconnected in a delicate manner so as not to even drag the device. In its place the new MacBook pros use a traditional Type-C USB Connector for charging, but Apple seems interested in reintroducing the MAGSAFE approach with an adapter that appeared in a patent filed by the company last year.

The document was filed in January 2016 and is described as a solution that allows the use of MagSafe loaders through the Universal Serial Bus Type-C technology. This is in the case of an adapter that connects to the USB Type-C reversible port and the other end contains the port for the MagSafe connector. This way the technology can not only be used with Apple computers, but also with any system with USB Type-C ports.

The new MacBook pros have been criticized right on the front of the connectivity, with Apple that has encouraged the transportability by forgoing some essential ports in the professional field. The company has been targeted by users and critics because its latest products require too many accessories and external adaptors to fill their gaps with respect to the models of the past, representing this aspect a considerable compromise in the experience Use in mobility.

The new MacBook Pro has 4 USB Type-C ports and a 3.5 mm jack, and for every alternative need an adapter. Among these you could add the new MagSafe connector via USB Type-C in the range of proprietary solutions, although the same concept has already been exploited by several third-party manufacturers. And it's no surprise that the patent was deposited on the day of the announcement of Griffin's BreakSafe Magnetic USB Type-C.